I’m sad to even have to write about this. But I’ll back it up for those who may not have heard about it yet.

On August 17th, during an Eminem concert in Ireland, a 17-year old girl was photographed giving blow jobs to two different men and uploaded to the online world that be by a bystander. 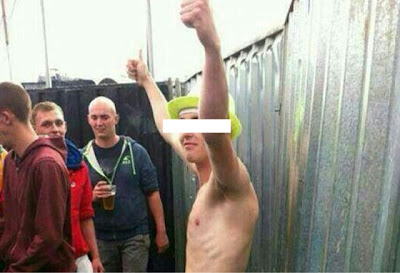 Needless to say this has gone viral through all social networks and deemed with the hash tag #slanegirl. In the process the girls identity and age have been revealed forcing Facebook, Twitter, and Instagram to delete the explicit pics while a child pornography investigation is underway.

Currently the girl is seeking solace in a mental health hospital for distress.  (Understandably)

The real story here is how much this has sparked people from all over the world to comment on this poor 17-year-old’s actions. Some continue the “slut-shaming” while others come to her defense. No where in the situation do the men come into play. 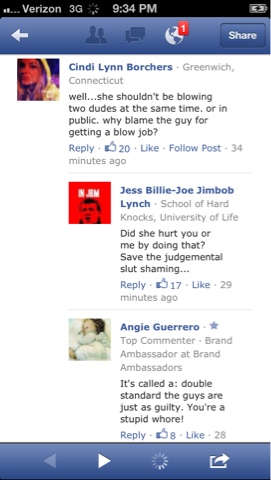 Some call her a whore, some call her living her own life. Many call it a double standard. Whatever you call her, when did it become socially acceptable for users to post ANY kind of blow job pictures?? How were pictures of a young girl giving a blow job NOT taken down before an official investigation was launched for child pornography?

Where is the responsibility of the social networks? Do they not have any? Now, people all over the world are commenting and judging the actions of this poor girl, for doing something which happens all the time and just isn’t uploaded. Should she have been more careful with doing it in public? Maybe. Does that mean she should be publicly shamed WORLDwide for learning a teenage lesson? Doubtful. I am truly disgusted at what social media has come to, where people are able to publicly shame someone they don’t even know behind the safe walls of their own computer, where they don’t have to face anyone. Or maybe I’m just being naive.

Yes, it’s true that social media was made for independence and the right to do with it as you will, which means a certain amount of freedom. But where are the boundaries? Is it right to even put boundaries on social media?

More importantly, what kind of steps can we take so that the life of a teenager isn’t altered traumatically and changed for the rest of her life, while the world watches…

One thought on “#SlaneGirl: Social Media Takes a Turn for the Worst”

What Says You? Cancel reply

Living a Balanced Life In An Offset World